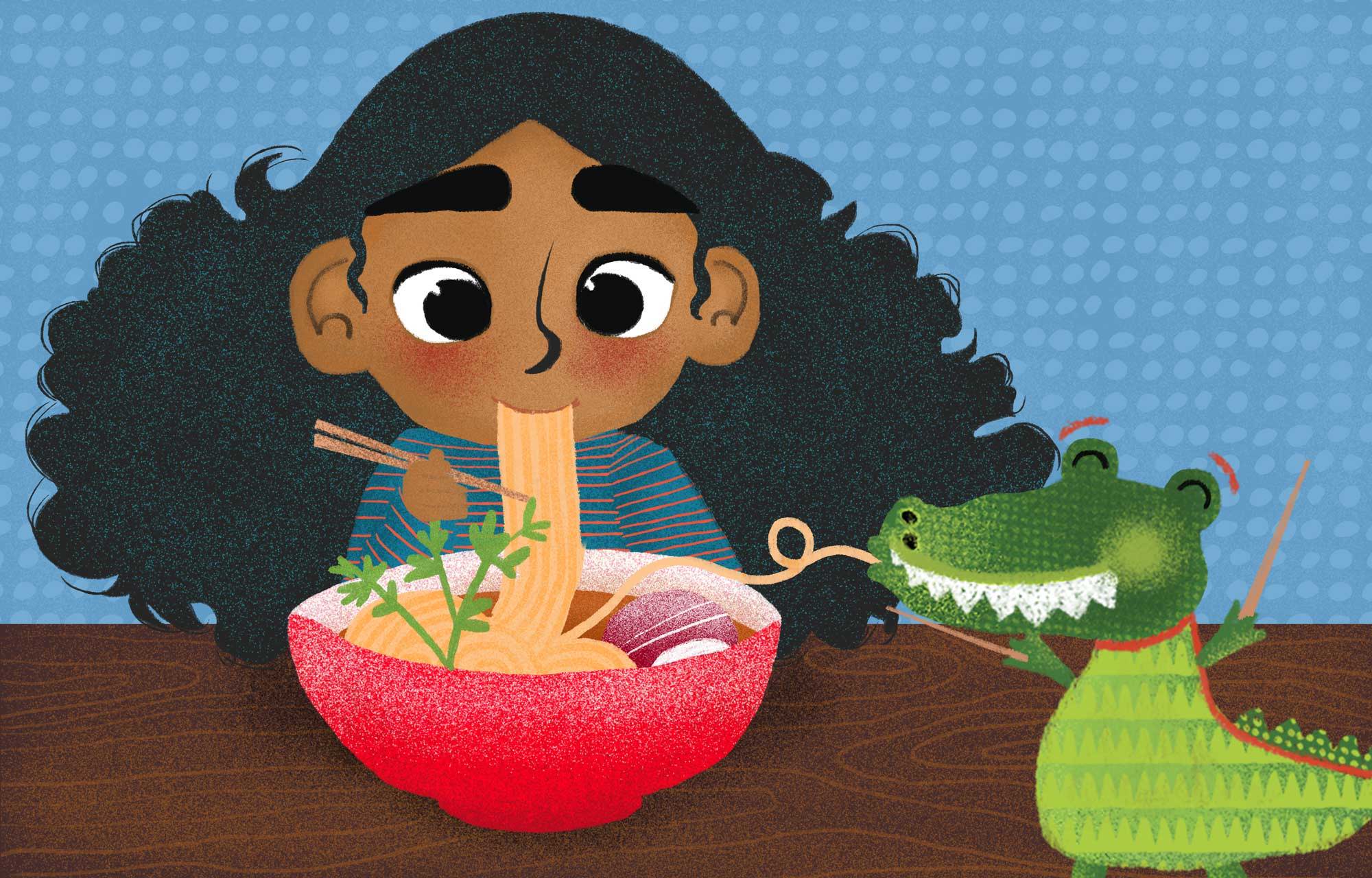 February 6, 2020 - Los Angeles - In a competitive bid, Imagine Kids+Family has won the rights to KALAMATA’S KITCHEN, a brand that helps kids learn about the world through adventures with food. Imagine Kids+Family will develop an animated series for pre-school kids and families, encouraging them to become curious, courageous and compassionate “Taste Buds”. In addition to the TV series, Imagine will work with the KALAMATA’s KITCHEN team to expand the original brand ecosystem, which includes a book series, into a global lifestyle franchise to include consumer products, culinary events, partnerships, gaming and more.

“Kalamata’s Kitchen is like “Parts Unknown” with a dash of magic for kids and parents,” said Sperber. “We love that Kalamata, a young adventurous eater from South Asia, and her stuffed alligator pal Al Dente, experience different cultures and make different memories all involving the universal act of cooking and eating together. This is a show that brings generations, cultures and tastes together in a way that will get kids wanting to try new foods and new adventures.”

Throughout her adventures, Kalamata celebrates kids as they take the Taste Bud Pledge: “I promise to keep my mind open and my fork ready, to try each new food at least twice, and share what’s on my plate when someone doesn’t have enough.” The Kalamata's Kitchen brand also includes their Taste Bud Travel Guide, a growing list of family-friendly restaurants across the country to help parents identify restaurants that offer unique food experiences while treating kids like VIPs.

The franchise is further strengthened by a partnership with Random House Children’s Books, a Penguin Random House company. The celebrated publishing company inked a multi-book deal with KALAMATA’S KITCHEN with the first book in the series to be published in fall of 2021.

“Derek and I have always envisioned a partnership that would allow us to bring the mission and movement behind Kalamata and Al Dente to kids and families everywhere,” said Sarah Thomas, Co-founder & Chief Imaginator of Kalamata’s Kitchen, “With Imagine, we have a dream scenario: the talent, passion and true understanding of the impact Kalamata and her Taste Buds can have on the world.”

While originally launched as a Kickstarter in 2018, KALAMATA’S KITCHEN has developed an impressive fan club, including Chrissy Teigen, Padma Lakshmi, and children and parents across the world. The brand was featured on CBS This Morning with “Taste Bud” and renowned chef, Eric Ripert. KALAMATA’S KITCHEN was co-founded by Derek Wallace and Sarah Thomas. CAA served up the partnership agreement on behalf of KALAMATA’s KITCHEN.

Imagine Kids+Family was started a year ago by Imagine Entertainment, and is run by Sperber. The division recently announced their first live-action series with Nickelodeon, a partnership James Patterson’s kids division JIMMY Books, as well as a partnership with LIFE to develop LIFE for Kids, an animated series using images from the preeminent picture magazine to bring history to life in a new, fun and engaging way for kids.

About Imagine Entertainment
Founded in 1986 by Brian Grazer and Ron Howard, Imagine Entertainment is an award-wining global entertainment company telling stories that inspire and empower, and create unforgettable entertainment experiences across all genres of film, television, documentary, kids and family, and brand integrated content. Imagine’s productions have been honored with more than 60 prestigious awards including 43 Academy Award nominations and 195 Emmy® award nominations. Past productions include the Academy Award Best Picture winner A Beautiful Mind, as well as Grammy Award Best Film winner The Beatles: Eight Days A Week – The Touring Years. Additional films include Get on Up, Rush, J. Edgar, Frost/Nixon, American Gangster, The Da Vinci Code, Apollo 13, 8 Mile, Liar, Liar, Backdraft, and Parenthood to name a few. Recent films include the critically acclaimed Pavarotti, and The Spy Who Dumped Me staring Mila Kunis and Kate McKinnon which won of the 2018 People Choice Award for Best Comedy. Current film productions include the documentary Once Were Brothers: Robbie Robertson and The Band which opens in select on theaters February 21, 2020; the film adaption of the NY Times bestseller Hillbilly Elegy; Tick, Tick…Boom! directed by Lin-Manuel Miranda; Curious George based on the beloved children’s character; a re-imaging of the hit Imagine films Friday Night Lights and Fear; the documentary Dads; and the documentary Rebuilding Paradise, which follows the community of Paradise, California, as it rebuilds following the devastation of the 2018 California wildfires. Current television projects in production include Genius: Aretha (NatGeo), Wu-Tang: An American Saga (Hulu), 68 Whiskey (Paramount), Swagger (Apple), Why Women Kill (CBS All Access), and Filthy Rich (Fox). Additional television productions include Fox’s Empire, Shots Fired and the 24 franchise; NatGeo’s Genius anthology series; NBC’s Parenthood and Friday Night Lights; Fox’s and Netflix’s Arrested Development; and HBO's From the Earth to the Moon, for which Howard and Grazer won the Emmy® for Outstanding Mini-Series. Grazer and Howard began their collaboration in the early 80’s with the hit comedies Night Shift and Splash, and continue to run Imagine Entertainment as chairmen. www.imagine-entertainment.com

About Kalamata’s Kitchen
Kalamata’s Kitchen, LLC. launched in 2018 and was co-founded by Derek Wallace and Sarah Thomas with a mission of helping kids learn about new cultures through adventures with food. The brand offers engaging live events, a collection of books featuring renown Chefs, the Taste Bud Travel Guide, games and kids kitchen tools. Featuring Kalamata and her pal Al Dente, the brand nurtures a curiosity for food and cultures in conjunction with some of the world’s most celebrated Chefs. In partnership with Imagine Entertainment, Kalamata will come to life in an animated series. Her books will reach children and families across the U.S. in partnership with Random House Children’s Books. Together, the team and partners of Kalamata’s Kitchen set out to create a new generation of curious and compassionate eaters. Kalamata’s Kitchen invites friends to take the Taste Bud Pledge and explore her world at www.kalamataskitchen.com.